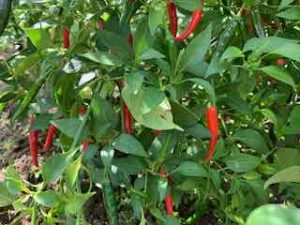 Peppers can be red, green, yellow, orange, purple, black, sweet or spicy!  According to The Victory Garden Cookbook by Marian Morash, the color of peppers has nothing to do with spice.  “The degree of heat in a pepper depends upon the amount of heat compound, capsaicin, it contains.  Capsaicin is lodged in the heat pustules located in the pepper’s interior ribbon of tissue and its seeds.  When you remove the tissue and seeds, you greatly decrease the pepper’s pungency.”

Peppers are a prolific crop and produce a lot of fruit, however, they are picky!  The temperature has to be just right for the plant to flower and produce fruit production; not too cold and not too hot.

-Whole, unwashed peppers will store in the fridge for 3-5 days.  Keep in a plastic bag in the crisper drawer in the fridge and they may last up to a seven days.

– Store whole peppers in ziplock bags in the freezer for winter eating.  They will not be as crunchy as fresh peppers, but will do well in frittatas, soups, stews, casserole dishes, and quiches.

-Peeled peppers have a more intense flavor and softer texture.

– To peel peppers: lay peppers on a broiler pan and broil until their skins blister (2-3 minutes).  WIth a tong or long fork, slightly rotate the peppers until all sides have been charred.  Remove the peppers and put them in a paper bag.  Close the bag and let the peppers sti for 15-20 minutes.  Hold each pepper over a bowl, slit down one side, open it up and scoop out the seeds, ribs, and stem.  Cut the pepper into 2-3 pieces and peel the loosened skin off.  The bowl collects the pepper juices, which can be used to store the peeled peppers if you wish.